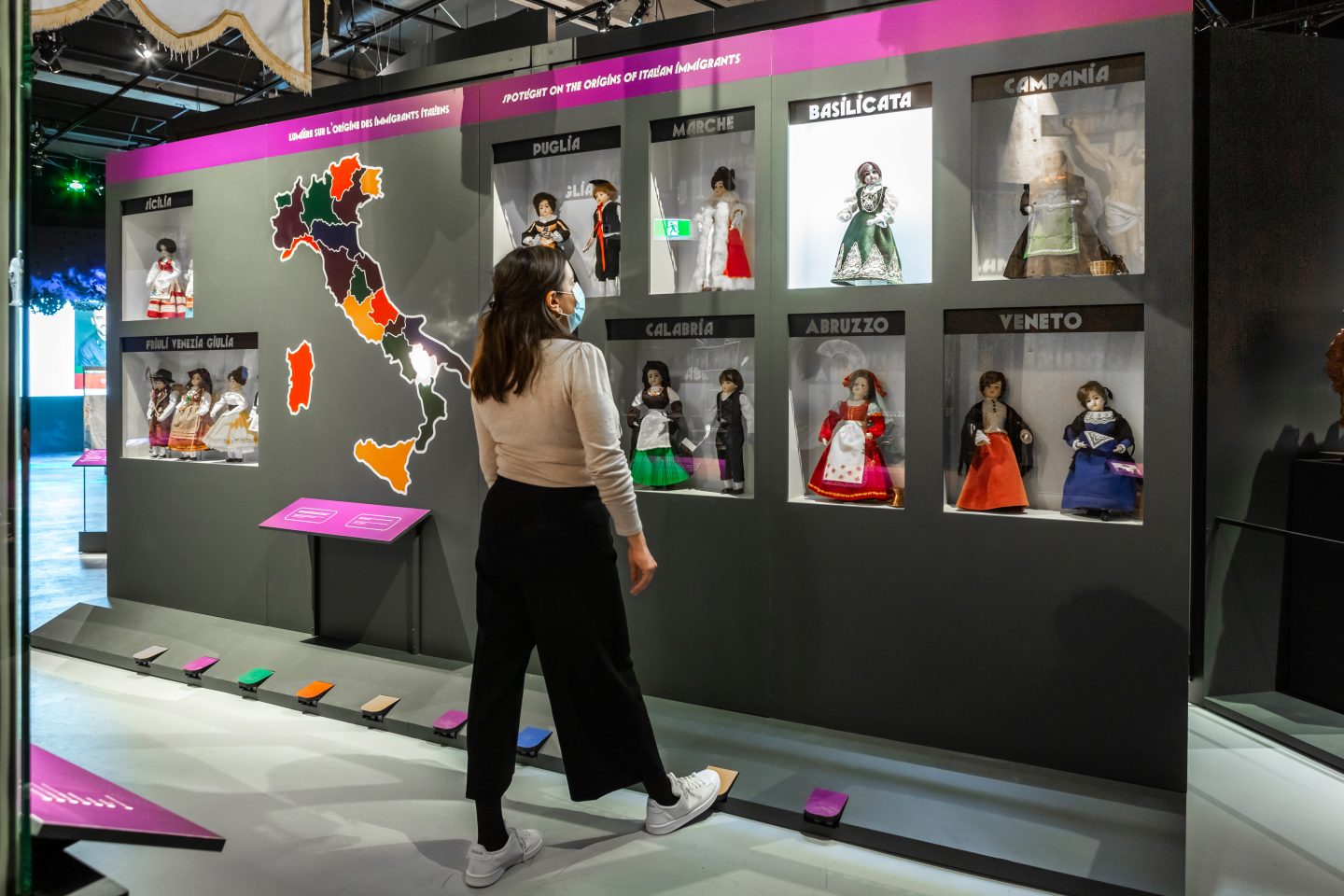 Visit Italian Montréal in a new exhibition at Pointe-à-Callière

Starting on March 10, Pointe-à-Callière is giving the public an opportunity to explore the rich heritage of Montréal’s Italian community in the new exhibition Italian Montréal. Spanning the late 19th century to the present day, the exhibition traces the moving journey of hundreds of thousands of Italo-Montrealers, examining the influence of one of the oldest and largest immigrant cultural communities in Montréal.

With the collaboration of several associations and members of the community, Pointe-à-Callière has produced an exhibition that puts a human face at the centre of the story, illustrating the Italian community’s remarkable contribution to Montréal life. Some 46 Italo-Montréal lenders and families have entrusted Pointe-à-Callière with their stirring memories and invaluable family heirlooms—over 325 objects brought over from Italy or made here in memory of a life lived elsewhere are on display.

“With a quarter of a million Montrealers today describing themselves as having Italian roots, Pointe-à-Callière wanted to acknowledge this community’s remarkable involvement and important contribution to economic, social, and cultural life in Montréal. With Italo-Montrealers’ eager and active participation—through the loan of items, the sharing of moving family archives and keepsakes, and a generous and dynamic contribution to the project’s development—Pointe-à-Callière is presenting a unique exhibition that reflects this community that has distinguished itself through its ingenuity, resilience, and multiple talents in all spheres of society,” explains Anne Élisabeth Thibault, Executive Director of Pointe-à-Callière. “The exhibition traces the journey of Italo-Montrealers from the early 20th century, when they arrived in Montréal in great masses, to the present day, when close to 280,000 residents describe themselves as Italo-Montrealers,” adds Ms. Thibault.

In Italy, between 1861 and the First World War, economic and political problems prompted over 14 million people to leave the country. Montréal, Canada’s economic capital at the time, welcomed part of this exodus. For immigrants seeking employment, the developing city became a very attractive draw. This is the point at which Italian Montréal begins, taking visitors through five iconic spaces that defined and still distinguish this community.

The exhibition begins at the train station and on a commercial street, the arrival point for many workers of Italian origin recruited by major Canadian companies to work on various projects, like the tramway, railway facilities, or in the construction sector. This section also examines the paths of certain Italian immigrants and their rise in society, the arrival of women in the work force, and the development of many Italian businesses and large iconic firms.

We then make our way to the café, a true hub for socializing, where people relax, talk politics, and follow sports. The café is the ideal place to discuss cycling and soccer, two sports that Italians helped popularize in a significant way. At one time, there was just one bike shop in Montréal—Quilicot Bicycles, founded by an Italo-Montrealer. The exhibition showcases the city’s most well-known Italian cafés, while also examining the café as a symbol of certain community members’ involvement in social movements of the time, such as trade unionism, to improve conditions on worksites, and the advancement of the women’s movement.

Another important location, the home. A symbol of individual success for the Italian community, it corresponds to a key stage of an immigrant’s settlement in a new land. The duplex—a Montréal invention—is in fact directly linked to the Italian community and its needs. The home is also where culinary traditions are perpetuated, slowly going on to influence the culinary tastes of all Quebecers beginning in the 1950s. The Italian language is preserved and maintained in the home—and modified as well, with Montréal developing its own unique Italo-Montréal slang, a resulting blend of French, English, and Italian dialects.

The exhibition then takes us to church, as a meeting place and site of major events, but also to illustrate the community’s know-how in the sphere of religious art, its contribution to the construction of magnificent places of worship, and the development of certain neighbourhoods. People gather at church, giving rise to the creation of various Italian associations, of which there are some 120 in Montréal, representing the native villages and regions of community members.

Italo-Montrealers are today found in all spheres of society, and their influence on the host community is indisputable. The exhibition ends in the public sphere. We shine a spotlight on the careers and accomplishments of various inspiring Italo-Montreal creators and artists who have helped further the reach of both Montréal and Québec all around the world. Historical photographs, audio-visual documents, archival documents, and first-hand accounts are used to punctuate the often very moving highlights in the lives of the first generations of immigrants. Included are objects illustrating culinary traditions, of course, as well as those representing iconic businesses, important events, and members of the community who have distinguished themselves in the arts, business, sports, and the public sphere. Visitors can also share their impressions interactively and tell their own stories in their own way.

Pointe-à-Callière invites all Montrealers and history enthusiasts to join us in this exploration of the rich history and heritage of Montréal’s Italian community. Benvenuti a tutti!