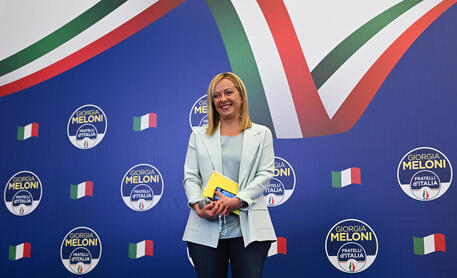 BBC – Far-right leader Giorgia Meloni has claimed victory in Italy’s election, and is on course to become the country’s first female prime minister.

That will alarm much of Europe as Italy is the EU’s third-biggest economy.

However, speaking after the vote, Ms Meloni said her Brothers of Italy party would “govern for everyone” and would not betray people’s trust.

“Italians have sent a clear message in favour of a right-wing government led by Brothers of Italy,” she told reporters in Rome, holding up a sign saying “Thank you Italy”.

She is set to win 26% of the vote, based on provisional results, ahead of her closest rival Enrico Letta from the centre left.

Italy shifts to the right as voters reward Meloni’s party

Italy’s lurch to the far right immediately shifted Europe’s geopolitical reality, placing a euroskeptic party in position to lead a founding member of the European Union and its third-largest economy. Right-wing leaders across Europe immediately hailed Meloni’s victory and her party’s meteoric rise as sending a historic message to Brussels.

TheGuardian – The leader of the Brothers of Italy party appears set to become country’s first female PMGiorgia Meloni has claimed victory in Italy’s elections and promised to govern for all Italians, after exit polls gave her rightwing coalition a clear majority, putting her on course to create the most rightwing government since the end of the second world war.

With full results due on Monday, the Brothers of Italy leader is set to become Italy’s first female prime minister – and a model for nationalist parties across Europe as she heads one of the EU’s six original member states.

Italy swings to the hard right after clear election victory by Giorgia Meloni, who is set to emerge as the country’s first female prime minister

CTVNews – Italian voters rewarded Giorgia Meloni’s euroskeptic party with neo-fascist roots, propelling the country toward what likely would be its first far-right-led government since Second World War, based on partial results Monday from the election for Parliament.

In a victory speech, far-right Italian leader Giorgia Meloni struck a moderate tone after projections based on votes counted from some two-thirds of polling stations showed her Brothers of Italy party ahead of other contenders in Sunday’s balloting.

TheNewYorkTimes – Italy turned a page of European history on Sunday by electing a hard-right coalition led by Giorgia Meloni, whose long record of bashing the European Union, international bankers and migrants has sown concern about the nation’s reliability in the Western alliance.

Results released early Monday showed that Ms. Meloni, the leader of the nationalist Brothers of Italy, a party descended from the remnants of fascism, had led a right-wing coalition to a majority in Parliament, defeating a fractured left and a resurgent anti-establishment movement.