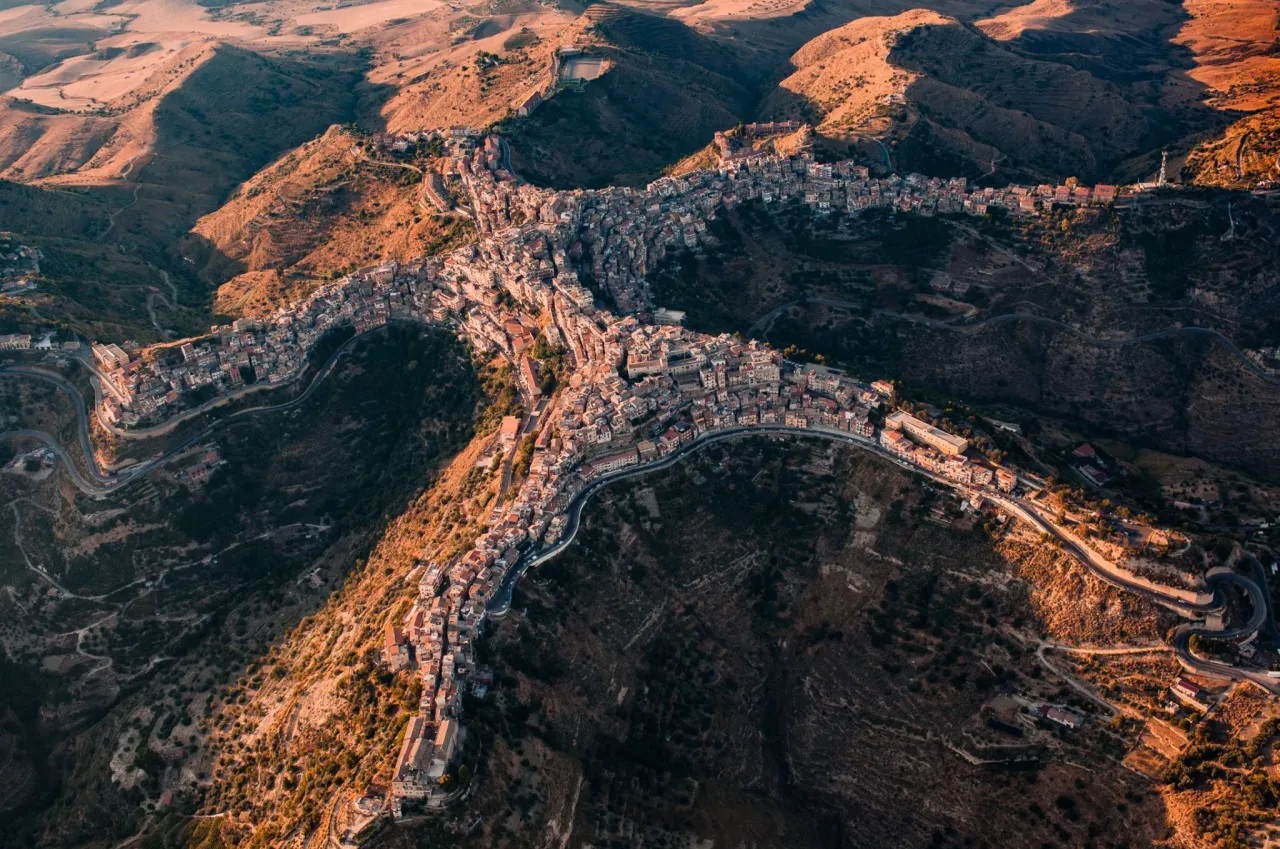 Centuripe, a small town tucked in the hills of Sicily, is known as “the balcony of Sicily” for the stunning views it offers across to Mount Etna.

Random Times – In Italy there are some really unique villages in the world. Some are famous for their history and others thanks to their “shape”. And Centuripe has both of these characteristics.

It is a small Sicilian hamlet of 5000 inhabitants, in the province of Enna, east-central Sicily, with an elevation of 732 m on a ridge between the Simeto and Dittaino rivers, northwest of Catania.

Observing any image taken from above, it is impossible not to notice a similarity with the shape of a person, even though perceptions are always very subjective. In fact, there are those who associate the image to the shape of a starfish but, either way, in technical jargon this kind of urban plan is said “polylobate”, meaning that from the center of the town various branches extend in several directions, 5 in this case.

In reality, the reason for this conformation is linked to the orography of the territory, as the development of the constructions follows, almost obligatorily, the natural morphology of the reliefs.

Historically, humans frequents this area since Prehistory, but the foundation of the settlement, with the name of Kentoripa, is due to the ancient Greeks.

The ancient Centuripae, which the Greek historian Thucydides called a city of the Siculi (an ancient Sicilian tribe), allied itself with Athens against Syracuse. Centuripae remained independent of Syracuse, except for a period of domination under the Syracusan tyrant Agathocles, until it was taken by Rome in the First Punic War.

The city apparently suffered in the Roman war against Sextus Pompeius, son of Pompey the Great, and did not regain its prosperity. Partly destroyed by Frederick II in 1233, after which most of the inhabitants moved to Augusta, the city’s ruin was completed by Charles of Anjou.

It was later rebuilt by Francesco Moncada, count of Adernò (now Adrano), and was ruled by his descendants as a county until 1813.

In any case the city, like the most of Sicily, underwent many dominations: Romans, Arabs, Normans and finally Angevins, who destroyed it completely.