ICFF / L'Altra Italia Home Streaming: Once Upon a Time in Bethlehem 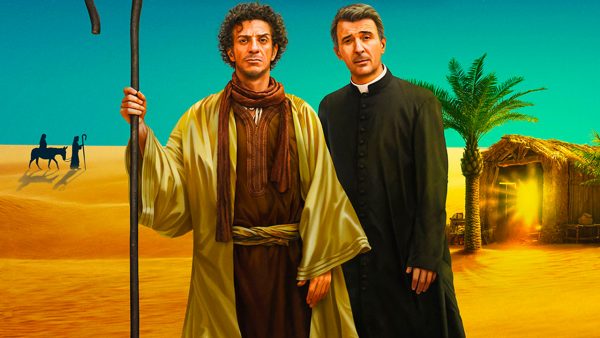 ICCF and L'Altra Italia, with the support of the Istituto Italiano di Cultura Toronto, start off their 2021 monthly film

ICCF and L’Altra Italia, with the support of the Istituto Italiano di Cultura Toronto, start off their 2021 monthly film series with the comedy Once Upon a Time in Bethlehem (Il primo Natale), directed by and starring renowned Italian comedy duo, Ficarra e Picone.

In a small Sicilian town in 2019, a local church organizes a nativity scene. At the helm of the operation is Valentino, a straight-laced, traditionalist priest who typically prays first and acts later. Playing St. Joseph in the nativity scene is Salvo, a bumbling, selfish thief who hopes to steal the statue of the infant Jesus and sell it for a fortune. When Salvo finally makes his move, he is pursued by Valentino into the marshlands. The two come out of the grasses, finding themselves in the middle of the Palestinian desert at the time of Jesus’ birth. After being detained by Roman soldiers, the two realize they must work together and find the Virgin Mary, their only hope being some kind of miracle that will bring them back home.

ABOUT SALVATORE FICARRA AND VALENTINO PICONE

Both born in Sicily in 1971, Salvatore Ficarra and Valentino Picone originally conceived of their stage comedy trio, Chiamata Urbana Urgente, with Salvatore Borrello in 1993. After Borrello left the troupe in 1998, the two reinvented themselves as Ficarra e Picone, and established a reputation for themselves with the award-winning Italian television program, Zelig. The duo made their directorial debut with the 2000 film Chiedimi se sono felice, and began acting onscreen with 2002’s Nati stanchi. They have spent the past two decades making films together, were nominated for Best New Director at the David di Donatello Awards for their work on Il 7 e l’8, and spent 2012 to 2014 on their theatrical tour, Apriti cielo.