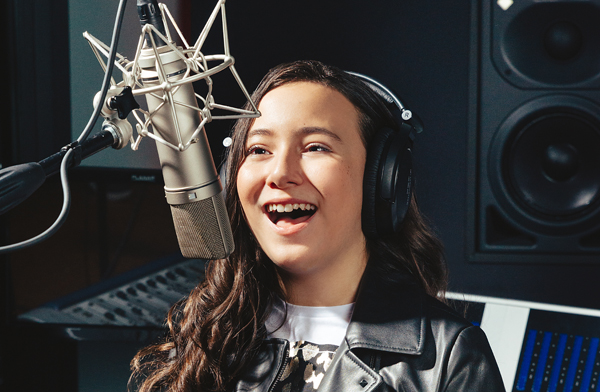 leven-year-old singer Roberta Battaglia made history this fall as the youngest Canadian to ever reach NBC’s America’s Got Talent (AGT) finals. The Brampton, Ontario native earned her fourth-place finish in September after performing Alessia Cara’s hit single “Scars to Your Beautiful”—an incredible ac- complishment considering the 2.5 million submissions received for Season 15. “I’m feeling so grateful and am thankful to all my supporters and fans,” she said to cele- brity judges and television audiences during an episode.

Battaglia began her musical journey as a toddler when she picked up a microphone at a local restaurant and began singing with her musician father. Mentored by her dad, her weekends consisted of restaurant, festival and gala gigs, including special appearances celebrating Italian Heritage Month and her Italian-Canadian community of Toronto.

Despite having performed on many stages since age three, nothing could have prepared Battaglia for the emo- tion she felt upon receiving the show’s coveted Golden Buzzer. “It was surreal. I didn’t think it would happen, and it was unexpected.”

Left mesmerized by Battaglia’s rendition of Lady Gaga and Bradley Cooper’s “Shallow” prior to the live shows in June, AGT judges Simon Cowell, Sofia Vergara, Howie Mandel and Heidi Klum were also moved when she publicly confessed to being bullied. This compelled Vergara to send a strong message to the audience “Let’s see who is going to bully you after this,” right before she “buzzed” Roberta through, catapulting her to the semifinals—and to stardom.

Not only is she an international singing phenom, but she has also become an anti-bullying advocate and is considered a role model for kids around North America. Described by Cowell as “humble,” proud parents Gabriella and Alessandro Battaglia have kept their daughter’s feet firmly on the ground by instilling in her the importance of altruism. In fact, Battaglia has regularly supported Toronto’s SickKids Hospital with various fundraising efforts.

Panoram Italia met with her to know more about her experience at AGT and her future projects.

How did your AGT journey begin? It all began when I submitted an audition tape to America’s Got Talent and was selected to audition on the stage. It was always my dream to be on AGT.

What would you say was most memorable about spending time in Los Angeles and being on AGT? I think the live shows were the greatest part of it all. My favourite moment was probably reaching the finals and semifinals. I got to the top 10, which for me was such a big deal. This is a journey that will remain in my heart the rest of my life, and just being in Los Angeles with both of my parents was fun.

What was the most important lesson you have learned from this whole experience? I learned that you need to work very, very hard to make your dreams come true. It was an experience that made me grow and under- stand that in order to be a singer there have to be sacrifices—busy days with long hours singing and rehearsing. It can sometimes be tiring, but it’s all worth it in the end.

bullying me as well, but I never let it get me down or change me because I believe every- one is unique in their own way. If anything,
it made me a stronger person, and now I know what to do if it happens again. There was a period where it was very tough, and I’m grateful to music and my parents who helped me along this path. If you are getting bullied, ignore it, but if it gets physical you definitely need to tell an adult you can trust, whether it’s a parent, guardian or a teacher or whom- ever. Just make sure you break your silence. Eventually it will get better, and it’s definitely been better for me.

Now that you have appeared in front of a world- wide television audience, what’s next for you? For the moment, I’m in school and practicing more music. I have an album in the works with original music and some cover songs, but I don’t precisely know when it will be released. So, stay tuned! I’m excited about my own merchandise, which is out now and available on my website. I believe this is just the beginning and a head start to where I want to be in my career and where I want to go in life and with music.

You covered a few artists during your AGT performances. Which artists would you like to perform a duet with? Definitely Lady Gaga and Pink.

Who have been your biggest influences perso- nally and professionally? I would say both my parents but mostly my dad, especially when you’re talking about music because my dad is the reason why I’m into mu- sic right now. When I was little, I always used to see him performing for crowds and making people smile just like I’m making people smile now. I’m very blessed to have this opportunity and to have a voice I can share with the world.

Other than performing, what would be your second career choice?Probably something in the music industry and radio broadcasting, like my dad.

What do you do in your spare time? I love cooking and baking with my mom. I also love spending quality time with my family and playing with my dog, Happy.

Tell us about growing up in an Italian- Canadian household. How important is your Italian culture to you? Do you speak and/or sing in Italian? Yes, I speak and sing fluently in Italian. I feel blessed to be Italian-Canadian and I’m defi- nitely proud of my culture, language and tradi- tions. Not only is my heritage very important to me, but so is the Italian community. I have a lot of Italian fans, and Italy is where my dad comes from and my mom’s origins are from there. So, basically, I’m half Italian and half Canadian.