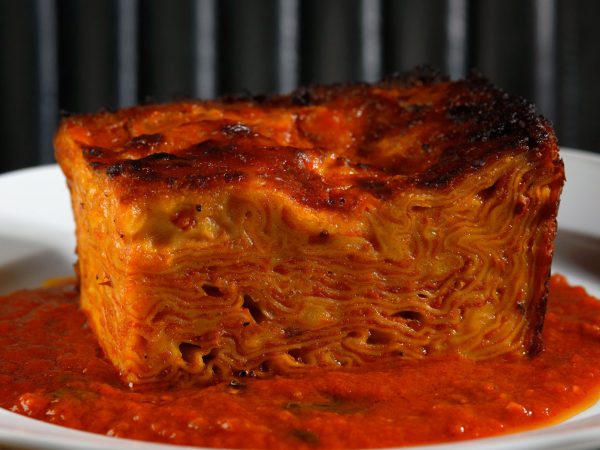 The sort-of secret: Porzia’s Lasagne, a weekly lasagna operation by Basilio Pesce, executive chef of Osteria Rialto
You may have heard of it if: You were a fan of Porzia, a now-closed Italian restaurant in Parkdale
But you probably haven’t tried it because: Pesce only makes two dozen lasagnas a week

A thick, bubbly, deep-brown crust is the first sign that this isn’t just any lasagna. Then, you pick it up: weighing in at almost four pounds, a single tray feels heavy, even for its substantial size. Porzia’s Lasagne—a once-a-week, pre-order only operation by Osteria Rialto’s executive chef, Basilio Pesce—gives lasagna its due. From fresh pasta prepared the day you pick it up to perfect pomodoro made with San Marzano tomatoes, this is the sort of food that helps you remember why a classic is a classic.

Pesce used to be chef-owner at the now-closed Porzia, a popular Italian restaurant in Parkdale that became notorious for its lasagna, offered only on Sundays. After the restaurant closed in 2015, Pesce’s lasagna popped up here and there at special events—at Sugo, Chantecler and even at a lasagna battle at the Drake’s 86’d Mondays. Bringing the dish back into regular rotation is a lockdown development; it runs out of Osteria Rialto’s kitchen, but it’s more or less a one-man show. And a wildly successful one, given that the trays sell out in about five minutes every single week.