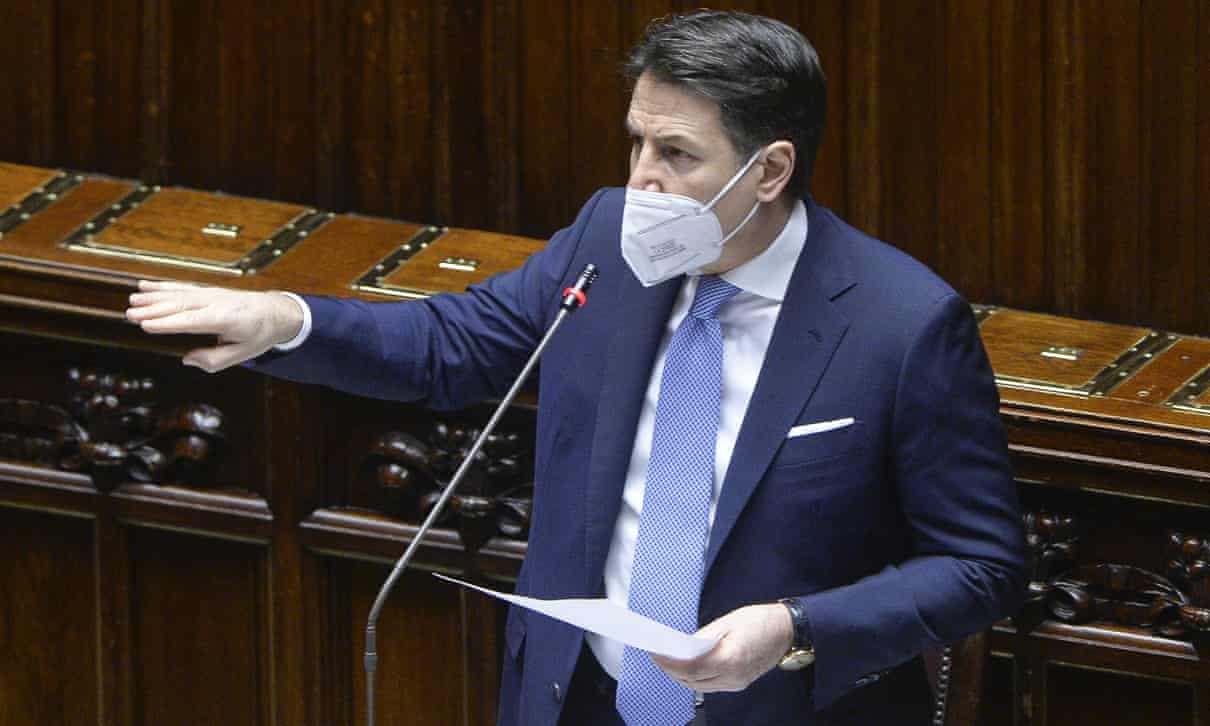 Italy deserves a “cohesive government”, its prime minister, Giuseppe Conte, has said as he began the fight for his coalition’s survival.

Conte told the lower house of parliament on Monday that the political crisis triggered last week by the former prime minister Matteo Renzi was “unfounded” and risked severely damaging the country at a time when Italians were struggling with health and financial worries.

“It comes at a crucial stage, in the middle of a pandemic, with citizens suffering from the loss of loved ones,” Conte added. “We risk everything, and losing contact with reality. Was there really a need to open a political crisis at this time?”

Conte is seeking to fill the void created by Renzi, who yanked his small Italia Viva party from the ruling coalition over disagreements about the handling of the pandemic and a post-Covid economic recovery plan.

Italia Viva’s departure deprived Conte of an absolute majority in both houses, and votes taking place later on Monday in the lower house and on Tuesday in the upper house will determine whether his fragile coalition can stay in power.

The vote in the upper house, where Conte could fall short of gaining the support of an absolute majority of senators, is the more crucial.

While Conte acknowledged errors made in managing the pandemic, he said he was speaking with his “head high” and not out of arrogance as he appealed for support from parliamentarians who had Italy’s “destiny at heart”.

Renzi told Corriere della Sera on Sunday that his 18 senators would probably abstain. However, his overtures about returning to the coalition if his party’s demands were met appeared to be rejected by Conte, who said: “What has happened cannot be cancelled.” The Five Star Movement (M5S), the biggest party in the coalition, and the Democratic party (PD) have refused to work with Renzi again.

Renzi has been widely criticised for a move that many have deemed irresponsible. With Italy poised to receive more than €200bn (£178bn) from the EU to reboot its economy, he argued his actions were needed in order to stop Conte amassing too much power. Renzi had criticised the spending plan as weak, arguing that the money risked being squandered. His other main grievance was over Italy not tapping the EU’s bailout fund – the European stability mechanism (ESM) – to shore up the health service. M5S has always resisted this, fearing that it would leave Italy beholden to strict EU austerity rules.

Analysts say the outcome of the crisis is difficult to predict. If Conte fails to win a solid majority, he is expected to resign, paving the way for a possible government of national unity, or, failing that, new elections.

“Conte’s message was clear – either I get new senators or I resign,” said Franco Pavoncello, a politics professor and president of John Cabot University in Rome. “He needs a lot of people … he can try to keep going but if he doesn’t get the majority it’s going to be difficult.”

Massimiliano Panarari, an associate professor at Mercatorium University in Rome, said: “There will be lots of negotiations going on and everything will depend on what happens after the vote in the senate.”