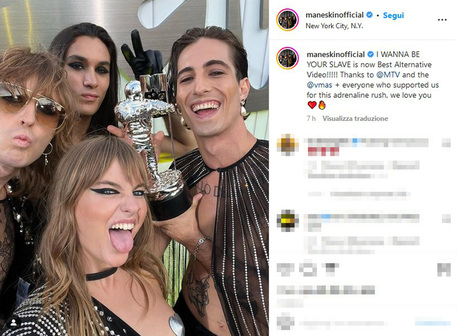 Roman rockers Måneskin became the first Italian band to win the best alternative video prize at the MTV Video Music Awards on Sunday night. The video was for the song ‘I wanna be your slave’. “It’s extraordinary,” said lead singer Damiano David. “We didn’t expect this. “It’s an honour. “There were so many great artists competing”. After getting the award the glam-rock group took to the stage at the Prudential Center in Newark, New Jersey to belt out their new hit ‘Supermodel’. The band, who were busking in a Rome street a few years ago and came second in Italy’s version of the X-Factor in 2017, won the Sanremo Song Festival and the Eurovision Song Contest last year. Victoria, Damiano, Ethan and Thomas went on to appear on the Tonight Show with Jimmy Fallon and Saturday Night Live, and shared the stage with Rolling Stones in November before playing the Coachella Festival in April. It was Måneskin’s debut at the MTV VMAs both as performers and candidates. The Italian foursome had also received a nomination as best new artists, but that went to American actress Dove Cameron.

Billboard – Earlier in the night, the group notched their first VMA win for best alternative video for “I Wanna Be Your Slave.”