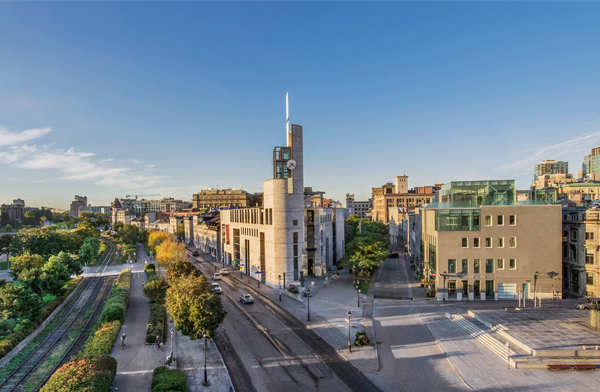 Montreal Italians in the Spotlight at Pointe-à-Callière

For the first time in its history, Pointe-à-Callière, Montreal’s Museum of Archeology and History, will present a temporary exhibit dedicated to one of the city’s oldest and most important immigrant communities. The Italian Montréal exhibition, devoted to theeconomic, social and cultural contribution of Italians to Montreal, will offer a unique opportunity to revisit the community’s evolution over the past century. In conversation with the exhibition project manager at Pointe-à-Callière, Samuel Moreau.

It is one of Montreal’s most important cultural communities, its history is extremely rich and its influence on the development of the metropolis has been enormous. We thought it would be interesting to give it a
full exhibition.

It was only after assessing its potential with our 2019 field survey that we decided to move forward. In the past, the museum had produced vari- ous exhibitions on Montreal’s neighbourhoods, and we could have focused on Little Italy. However, the subject being so much richer, culturally and historically, we thought it best to broaden our scope to include a more complete history of Italian-Montrealers, rather than restrict ourselves geographically to Little Italy.

Before the project came to fruition, the field survey I mentioned set out to meet with people, families and Italian-Montreal’s cultural organizations. Our goal was to take a pulse, gauge potential for an exhibit and identify which themes were most important to the community.

Then, we formed a scientific committee to establish our research bases and validate contents. Three scientists make up that committee, including two
of Italian origin. We also created another committee to handle relations with the Italian-Montreal community. We presented the exhibit’s contents to important cultural organizations and met with their representatives

to make sure we were well-aware of the community’s various facets and certain complex topics. The community, itself, contributed immensely to the exhibition by loaning artifacts. Indeed, unlike our normal exhibitions, the objects displayed do not mainly come from lending museums, but from families in Montreal’s Italian community.

What will the exhibit focus on?

The museum has created an exhibit that gets to the life of Italian-Mon- trealers, putting them at the center of the story and highlighting their community’s remarkable contribution to Montreal’s economic, social and cultural life, not to mention the talent, resilience and ingenuity it has dis- played. We show daily life for the first Italian immigrants to Montreal, as well as the community’s evolution over the past century to the present day, as one quarter of a million Montrealers claim Italian roots. The exhibition’s focus will be both current and historical, but it will not focus on question- ing identities nor attempting to define Italian-Montrealness.

The history presented includes the departure from Italy and arrival in Montreal of various waves of immigrants. We show the occupations they held and the modest businesses they worked in, and which have since become major drivers of the Quebec economy and important cultural symbols in Montreal. On the social and historical side, we will also revisit periods of turmoil, such as linguistic conflicts and the internment of Italian-Canadians, but also major contributions by Montreal’s Italians to social movements.

We also felt it essential to focus on culinary traditions, the Italian home, the importance of family ties throughout the community, education and identity transmission, as well as the associations, groups, parishes and other religious and secular traditions that helped with socialization. Finally, we end with a section on the arts and contributions from Italian-Mon- trealers to popular culture.

This exhibition will obviously be of interest to Italian-Montrealers who might rediscover their history through audiovisual projections, historical photographs, archival documents and family heirlooms, but it will also captivate other Montrealers interested in this history.

Is this project the first in a series on cultural communities?

This is one of the first times Pointe-à-Callière has dedicated an entire temporary exhibition to a single Montreal cultural community. The various cultural communities that built Montreal are featured in our permanent exhibitions and our multimedia displays. We dedicate a large section to cultural communities in our Building Montréal exhibit. For the moment, we have no plans to present other exhibits on specific cultural communities, but these are certainly very im- portant and relevant subjects for our museum, whose mission is to promote knowledge of Montreal’s history.