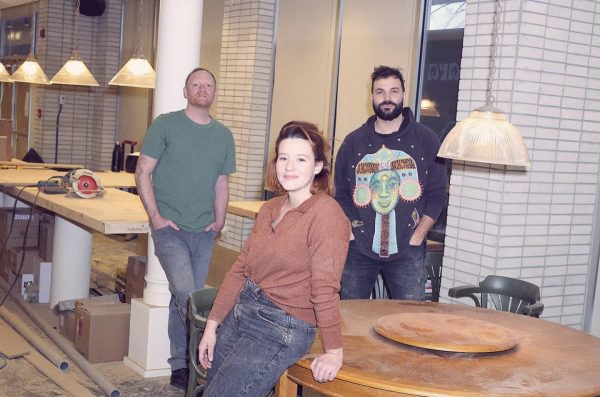 BarBara, An Italian Restaurant and Grocery From the Lili Co Team, Arrives in Saint-Henri, Eater

The pair responsible for the now-defunct, but still fondly remembered Mile End restaurant Lili Co are at it again. Except this time, David Pellizzari (chef) and Catherine Draws (front of house and wine) have made it farther west, to Saint-Henri, with the upcoming opening of their new Italian restaurant, BarBara, slated for January 25.

“It’s going to mainly be classic Italian, but then again it’s David, and he puts a little twist on everything he does,” Draws says. To illustrate, she points to his take on tortiglioni ragu, a pasta resembling rigatoni in shape (as per tradition), but served with a lamb ragu spiced with North African flavours — perhaps a nod to Pellizzari’s former gig at Petite Patrie’s Darna Bistroquet. “In that way he isn’t totally by the book, but then when it comes to his pasta-making he is,” she says.

Those acquainted with Pellizzari’s cooking at Lili Co will have already had a taste of his primo pastas skills, and they’ll also recognize the playful approach brought to BarBarra’s menu of veggie dishes, which include braised carrots draped in marscapone, pesto and sunflowers seeds, and leeks dressed in a popcorn sauce, hazelnut butter, and almonds. However, the only thing that’s being brought, wholesale, to the Notre-Dame West locale is his zeppoli. (“They’re these small donuts that are just so good, and they are Italian, so we thought why not?” Draws says.)

Open daily from 8 in the morning to 11 at night (for takeout until 7:30 p.m., and delivery only thereafter, as per Quebec government regulations), BarBara’s offering is meant to be all-purpose and all-encompassing. There are the above-noted pasta and veggie dishes, but the lineup also includes focaccia sandwiches (think Mortadella and caponata, or grilled vegetable), coffee, more sweets, and groceries on what they are calling the “dispensa” (Italian for “pantry”) side of the establishment.